This new collection of Josep Serra can be synthesized as an expansion and radicalization of the abstract tradition, an emancipation of the aesthetic sense in favor of the ontological, transfor 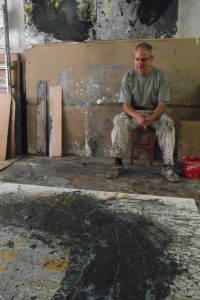 ming into language the freedom to create or build his own universe, and projecting it into the future while subjecting it to an ongoing process of reinterpretation. His work entails a meticulous discipline, where the concept of abstraction is defined by the time devoted to knowledge of the formal evolution of his referents. Josep Serra points out the difference between a work of Hans Hofmann and another of Jackson Pollock, who lives in mutual recognition, in a dialectic that transcends the keys of a paradigm called abstract expressionism, and that will revolutionize the theoretical propositions through the use of a specific technique, based on the subjectivity and the radicalism that each artist expresses in his works.

A reversible situation is created, wherein the paintings are transformed depending on the position of the subject and the viewer, one becoming “the other” regarded: a game of mirrors in which this revolving reciprocity defines the fundamental claim of uniqueness in each work of art. Josep Serra employs a combination of significant materials whose choice of which implies an aesthetic re-definition of their use, without rejecting the rules and formal assumptions of abstract classicism. His juxtaposed spatula-strokes expose the viewer to a permanent vibration wherein the eye cannot remain still, but is beckoned to travel through a hallucinatory space marked in some areas by the primary contrast between the black and white or the red and yellow which endow his works with luminosity and rare intensity.

Josep Serra knows the path of abstraction marked by such outstanding artists as Howard Hodgkin, Richard Serra or Christopher Wool, whose works strive to create an intense world of forms achieved through the meticulous application and the self-imposed discipline of a classical painter. He remarks: “I’m a representational painter, but not a painter of appearances. I paint representational pictures of emotional situations.” He has assumed a serious challenge where the energy and movement of his brush strokes are the axioms for a reconstruction of memory, where nothing can never be either improvised or casual. In the execution of this new series, the gestural representations suggest a hypothetical intention of the artist to interpret himself, transforming each sign and pictoric gesture, into a new visual concept.